This year, Cummins celebrates 100 years in Power Generation. It all started with the incorporation of Onan Corporation in 1920 – a family owned business founded by David W. Onan.

“The Onan story has so many parallels with Cummins. It started with one business idea and one visionary entrepreneur. What D. W. Onan started as a small business in Minnesota thrived for 100 years and became a global industry leader,” stated Alex Savelli, Executive Director of Cummins Power Generation.

Like Clessie Cummins, D. W. Onan was an innovator and a technical genius. After working for ten years at an automobile repair shop, D. W. Onan decided to test his abilities and entrepreneurial spirit by opening the Onan Corporation in 1920. At the time, Julius P. Dyke was his only full-time employee. Today, Cummins Power generation products are designed across four technical centers and produced at six different plants around the globe. In total, there are more than 5,000 employees working in Power Generation for Cummins with a global network of over 190 locations and territories.

Cummins has experienced many significant milestones over the past 100 years on its journey to becoming a global leader in the Power Generation business. “The full acquisitions of Onan Corporation in 1992 and Power Group International (PGI or ‘Petbow’) in 1994 were significant inflection points for Cummins in the Power Generation business. We moved from being a G-drive supplier of engines to become a global OEM of power generation equipment. Integrating Onan and Petbow added a big new dimension to ‘The Power of Cummins,’” stated Gino Butera, Vice President of Cummins Power Generation.

Today, Cummins combines market expertise with leading engineering and manufacturing technology to provide the world with fail-safe solutions for an exceptionally wide range of use-cases. From the world’s richest iron ore mine near the polar circle, to remote locations in the Brazilian jungle, to US military camps, to hyperscale data centers, and to RVs in the wilderness far from civilization, Cummins dependably meets the power needs of customers no matter where they are or where they need to go.

The legacy of D. W Onan is still present. He was not only a mechanical enthusiast but also a humanitarian. Today, Caring is a corporate value that has been carried consistently for over one-hundred years. As J. Irwin Miller reiterated, “Customers don’t care how much you know, until they know how much you care.” This sentiment is still visible around the organization. “We have to be passionate about what we do, why we’ve done it for the last one-hundred years and why we will continue to do it on our way to the next one-hundred years. This approach applies to our customers, our employees and the communities where we operate,” said Doug Sunkel, Fridley Plant Manager. Doug also stated, “We are working every day to turn the Fridley plant into a world-class Cummins manufacturing facility and to create the space and capability to take on new business. As we continue to increase our market share and performance in some of our existing products, we are also preparing for the next wave of technology.”

The world has changed significantly since Onan Corporation opened for business in 1920. In the modern world, how power is produced and consumed changes daily. Significant trends such as decentralization of utilities, renewable fuels such hydrogen and new digital requirements will shape our ability to respond and innovate. Cummins Power Generation celebrates its beginnings and its commitment to the next generation of power. Please join Cummins in commemorating the first 100 years in Power Generation and looking ahead to the next 100 years.

Did you know? Cullys an approved Western Australian Cummins Onan Distributor of spare parts and Service / Repair Agent for the RV/CM range of generators. We offer a comprehensive range of spare parts & accessories from our warehouse in Henderson. Our team of technicians undertake regular, specialised Cummins Onan training to ensure your generator is serviced and supported by the best. With a fully stocked service vehicle, we can offer regular servicing and repairs on site for your convenience, or at our warehouse in Henderson. 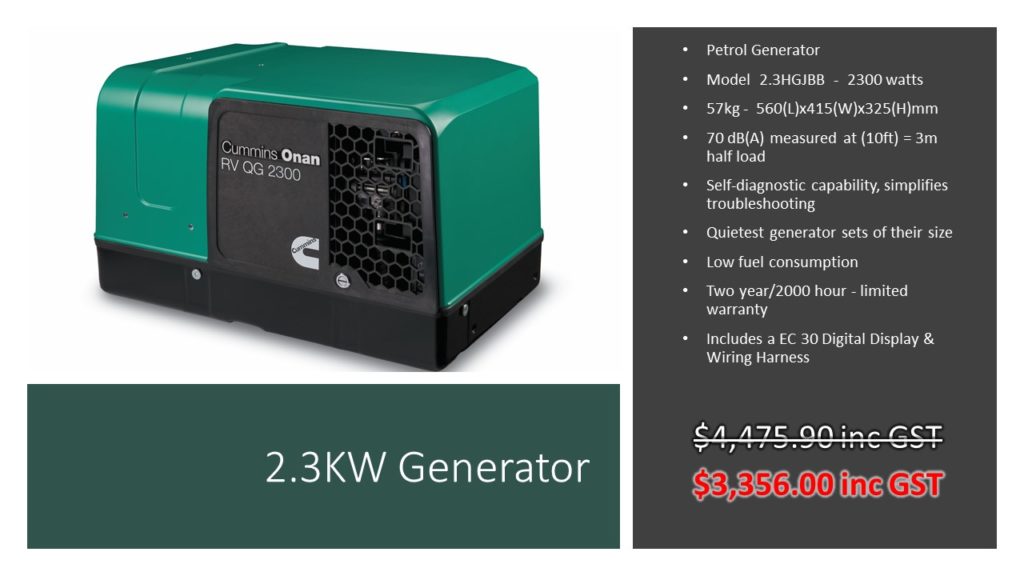 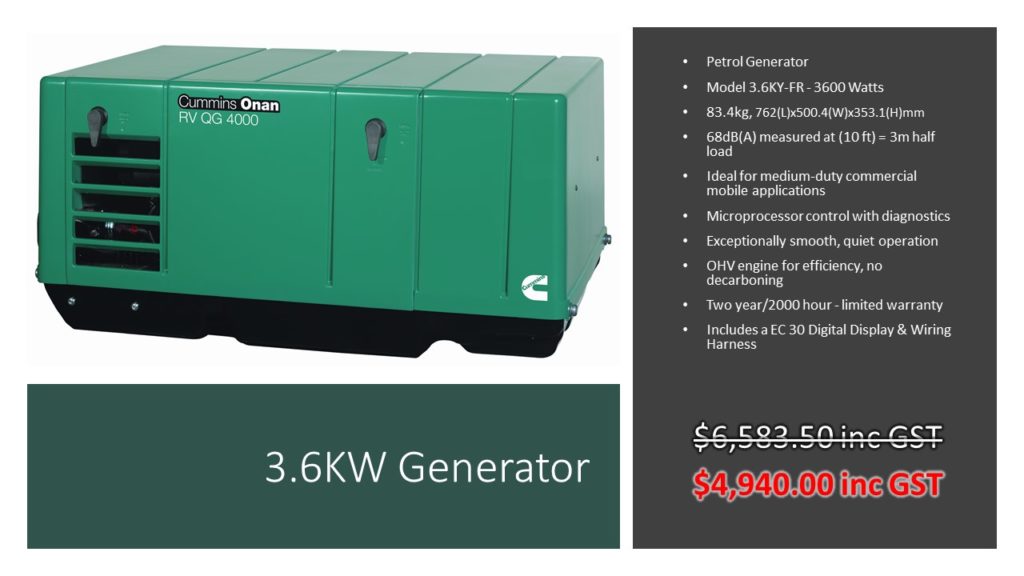 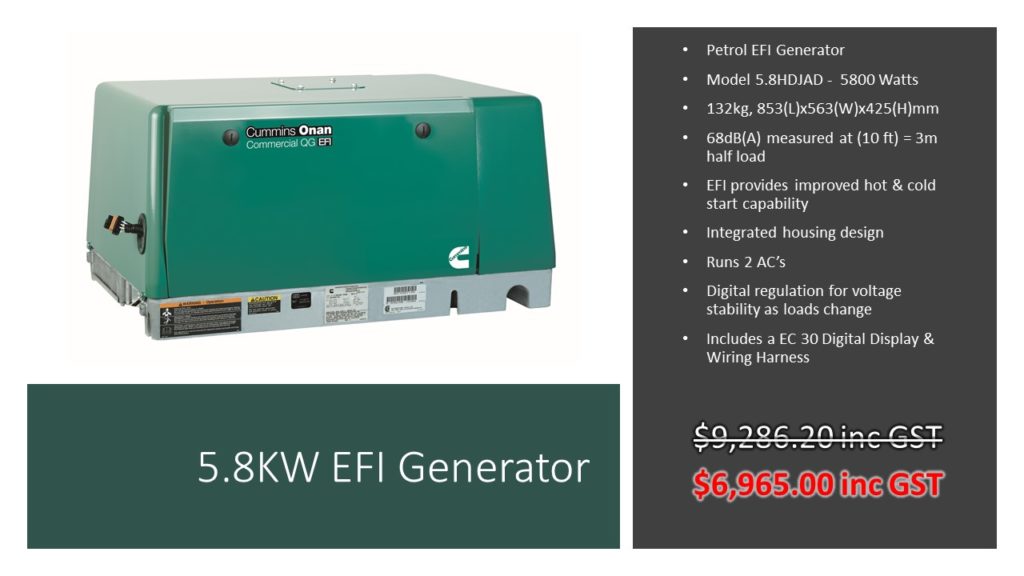 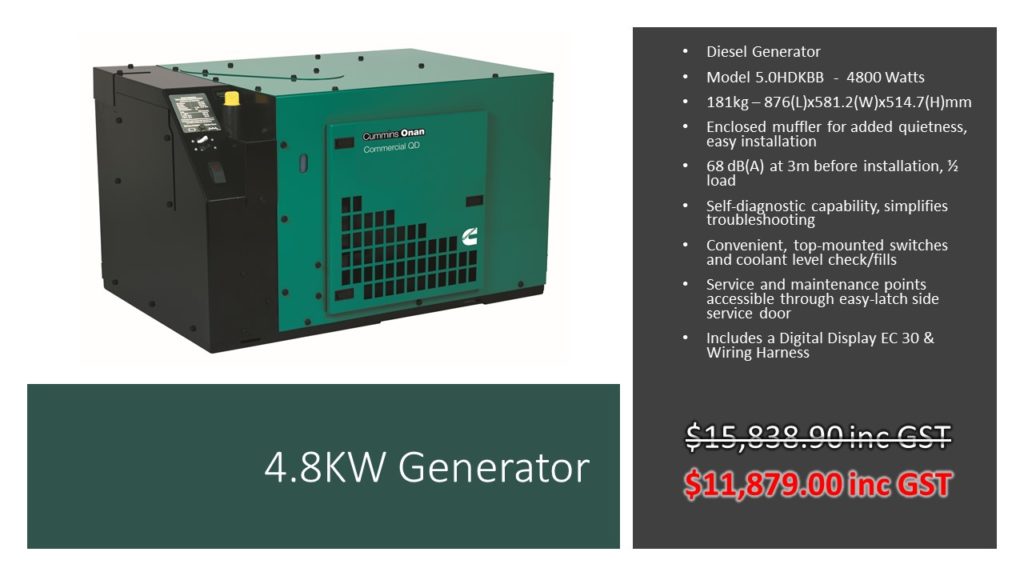 If you don’t run a tank of petrol each month, you could be risking the performance of your Cummins Onan RV Generator

If you store your RV over the winter, or don’t operate it often enough to refuel the petrol tank every month, you could develop a fuel varnishing problem in your generator engine.

Fuel varnishing is a gummy residue that clogs the generator carburettor and fuel pump. It’s caused by the deterioration of fuel that sits in the engine too long, and it happens in a surprisingly short period of time. Depending on fuel quality and storage conditions, gasoline can deteriorate in as little as 30 days. As long as you refuel frequently with fresh gasoline, and exercise the unit regularly, fuel varnishing is less likely to occur. But if you leave the same gasoline in the tank for several months, you’re very likely to have problems.

Fuel varnishing affects many engines but it’s more noticeable in generators because the engines are smaller. Even the slightest decrease in efficiency has a big impact on performance. A generator with varnish buildup may start but run like it needs a tune-up. It surges, accelerating and decelerating, but rarely settles at a stable operating speed. In many of the gasoline powered units, engine speed directly affects generator voltage output and frequency. As speed increases/decreases, so does the voltage and frequency.

Emptying the tank won’t prevent fuel varnishing because a small amount of fuel always remains in the generator carburettor. If you plan to leave the tank empty, we recommend that you add a special mixture of fuel and a preservative before you run the tank dry so the residual fuel contains the preservative.

Once varnishing has occurred, adding a preservative won’t correct the problem. You need to add a fuel cleaner, and manually scrub the varnish from the fuel system parts.

By understanding how to properly care for your RV generator and protect against fuel varnishing, you’ll enjoy better performance and longer operation. It may seem strange that “not” using a product causes it to fail faster. With generators, though, that’s exactly the case.

Important: Problems caused by fuel varnishing will not be covered under warranty. 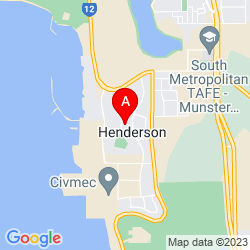